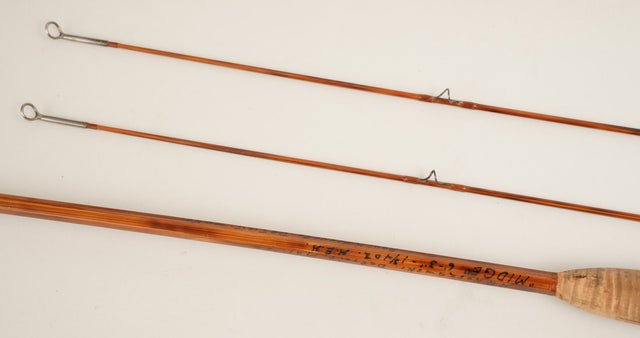 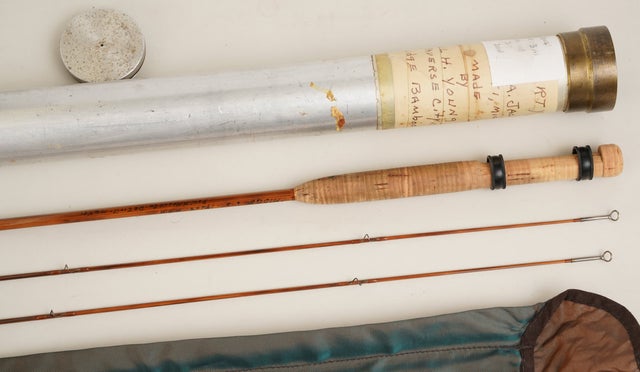 ~W.E. Carpenter "Like a Payne 97", 7 ft. 2pc/2 tips for #4 line. As you can see in the photos, this rod is in mint condition with the paper still on the grip and is marked both on the butt section below the ferrule, label on the rod tube and on the paper on the grip as a "Special Project." Walt Carpenter worked in the Payne shop after Jim Payne's passing and has always displayed an affinity for the work from that shop, and anyone seeing this rod for the first time would assume it is a Payne, until reading the writing on the rod shaft and paper on the grip. Stamping on the butt cap, which is also styled like a Payne cap, has a design similar to Payne, but reads "W.E. Carpenter / Maker" while on the opposite side is stamped "2011" indicating the year of build. The blue label on the tube will also look familiar to Payne fans as will the ferrule plug. Apparently the bamboo for this rod came originally from the Payne shop, and the same silks as Payne used were used to secure tungsten steel snake guides and the distinctive white agate stripping guide. Rod is marked as built on the Payne 97 taper, so a lighter action than the better known model 98. About as nice an example as you will find from one of America's premier makers, now no longer building commercially. Accompanying this sale are two papers, one a letter outlining Walt's approach in building this special project rod, and the other a pamphlet from when W.E. Carpenter was still in Chester, NY. In original bag with tag and double labeled tube. SOLD