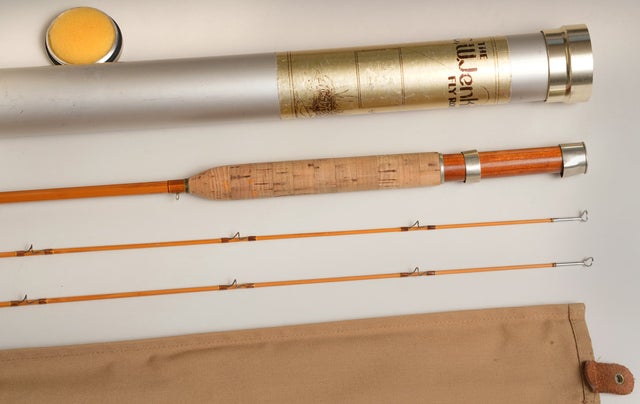 ​~Charlie Jenkins 7 ft. 2 pc/2 tips #GA70-29. I understand from the current owner that this rod was the 126th rod built by Charlie and it was finished in 1976. It has a distinctly 'Garrison-esque' feel to it and I like it with a WF5 line, though it will cast a DT4 as well. The "GA" in the serial number indicates a Garrison taper, while if it was marked "GL" it would indicate a rod inspired by Gillum. The stripping guide is hardened steel similar to the old 'Perfection' style, while the snakes are tungsten steel, all wrapped in medium brown thread tipped yellow and color preserved. A nice detail that I appreciate is the slide band which has been swaged to lay flat when engaged to the reel foot. Hoagy Carmichael taught me that many years ago and I've often wondered why more makers don't use this simple idea. Rod remains essentially straight and in at least very good condition, just a touch of blueing gone from the ferrules from years of use and one tip top deformed (see photos). I understand that Charlie carried on a correspondence with Mr. Garrison in his early building, and apparently Charlie gained an appreciation for Garrison's approach to tapers. I had the privilege of being with Charlie in southern Wyoming for a couple days many years ago on the banks of the North Platte and Encampment Creek; he is as fine a man as I have met and it is sad that he is gone, though his son Steve carries on the rod work. Comes in original bag and Jenkins labeled tube. SOLD Click on smaller images to enlarge