I now have a set taper and design for the 'G.M.S. Special' as outlined in my November 2016 post below. It took a number of prototypes to get the tip / butt balance to our satisfaction as well as a grip / reel-seat configuration that worked well and suited the rod. As you can see from the photo below, the grip and reel-seat are evolved from the old Paul Young 'ventilated grip'. I should be able to post at least one of this special model rod for sale some time this coming winter. 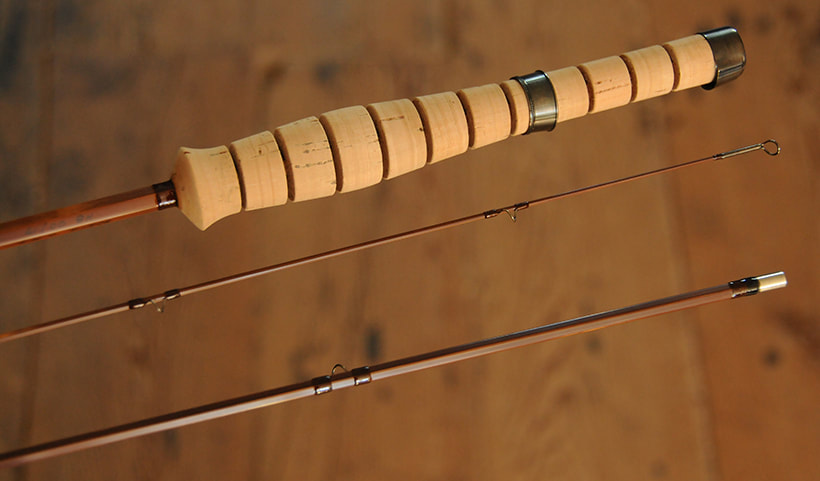 November 2016
One of the more interesting and challenging rod design projects I have been involved in had its genesis in a request from my friend, expert angler and artist Galen Mercer. Galen loves to stalk large individual fish with very light tackle; about a year ago he asked me if I could build him a #2 line rod, preferably in the eight foot range. I told him I thought I probably could, but that it was outside of the parameters I had so far developed rods for. After about a year of prototype work, I now have a design that works very well at 8 feet with a light action for #2 line. I have put some prototypes into Galen's hands and joined him in casting them to determine where we want to be. These are hexagonal, semi-hollow rods with micro ferrules and super-fine tips weighing right around 2 oz. I'm still hoping we will have time to test the prototypes on rising fish before the serious snow flies this winter, as it would be good to hook and land some good fish on this light tackle. I expect to make a small run of this model rod in the coming year, of course planning to keep one for myself.

March 2014
I am making progress on the projects already described in the January 2013 post; the staggered ferrule rods and the 8'3" 3 pc. #5 line quad. I brought both prototypes with me to Kathy Scott's 'Superboo' in Maine this February which was my first opportunity to cast them as we have had a very cold winter this year. Both prototypes are good, but not quite where I want them. The staggered ferrule rod is an 824-2 df 'Special' (8'2" 2 piece) and I felt the tips are a bit stronger than I want for the sweeter feel in close. I will be building the tweaked taper of this rod in the coming months. The 835-3 df HB prototype is a very good rod, but a bit stronger than I want, just a bit too fast. I have now built ferruled blanks for that model and they deflect right where I want, so I look forward to casting this rod when it is finished. The weather is starting to break, so casting will soon be available locally without making a trip to a gym in Maine!

I am also now building a run of seven foot #3 line 2 piece solid rods, the 703-2 df; this is a model I haven't built in many years. My original version of this model from the 1980's and 90's I felt was always more of a #3-4 line rod, so just a touch stronger than I want for the easy loading action I prefer for small stream fishing. Some of my favorite fishing in the past few years has been finding high country, very small streams in the mountains of Montana that very seldom if ever see a fly. For this fishing I really want a rod which loads easily with a very short line as the casts are often from 15-30 ft. Fishing one of my favorite meadow stretches last year I used a couple of different rods, but my favorite was my 7' #3 line rod from Tom Morgan (bamboo). That is now my benchmark for the latest version of my own 703. I now have prototype blanks ferruled up and they deflect right where they should and I am thinking I will have a rod as good as Tom's rod (or maybe even better?). I will be testing this new version on the upper Willowemoc in New York's Catskills this spring and then again in Montana in August. For this same fishing, I also look forward to finishing a Tom Morgan designed glass rod at 7'3" for a #3 line. With Tom's design work, I have really been appreciating the special qualities of fiberglass and it also brings me back to my early years when I loved my first Fenwick glass rod in the 1960's.

January 2013
My design project for the coming year will be to develop staggered ferrule trout rods based on the idea behind my 'Tournament Trout Fly' rod. The 'TTF' rod is 8'6" for a DT 6 line, while these trout rods will be generally shorter, from 7'9" to 8'3" for #3 and 4 lines.

I will also be making a rod that I haven't tried to make in over 25 years, an 8'3" 3 piece quad for #5 line. When I first started making bamboo rods in the 1980's, I was friends with the guys at Winston and they would come for dinner at my house in Pleasantville, NY every year before the outdoors show in Suffern, NY. It was Tom Morgan, Glenn Brackett and Jerry Siem and Jerry put forth a challenge for me to make a rod he thought would be a very good length / line combination. His suggestion was for a rod 8'3" long in three pieces for a #5 line. I accepted the challenge and made a number, 4 I believe, of rods to meet those specifications. They were really nice rods, but they were honestly better with a #6 line than with a 5. That was before I started hollow-building and of course the new rods will be my semi-hollow quad design I've used for many years now. It took me a while to get back to it, but I am splitting the bamboo for the rods now.

January 2012
After a very inspiring trip cross country this summer, I will this coming winter be developing a new series of rod models which will be dubbed 'Tournament Grade'; these will be the lightest feeling, fastest rods I have ever built. They are the result of insights gained from years of hollow-building and taper development and new component configurations. You will be amazed at how the tips stop on these new rods. I will have some early versions available to cast at the Somerset Show in January and finished models ready by the time of the gathering on the Henry's Fork in June. I look forward to putting one of these rods in your hand.

As part of this process of taper development I will be building a series of one-piece semi-hollow rods, including an 8½ foot rod for #4 line and likely an 8 ft. and 8'3" rod for #3 line. There was a time when an 8 ft. rod for #4 line was the holy grail for me, this back in the 1970's and 80's when I was first studying bamboo. It is exciting for me to now have far surpassed what I felt was possible so long ago. These new insights in the last year are now making possible even longer rods for lighter lines with exceptional performance.

About five or six years ago I was given a batch of Japanese bamboo from Yukihiro Yoshida, who not only builds rods, but also manages a grove of bamboo from which he gleans the raw material for his rods. Some of you will know Mr. Yoshida from the Somerset Fly Fishing Show in New Jersey where he has made an appearance for many years now. This winter I will be splitting this bamboo for the first time; it will be used on an experimental basis to make some light line rods from this unusual material. From my initial inspection, it looks to me as though the Japanese bamboo has a much thinner layer of power fiber than does Tonkin or Tsinglee Chinese bamboo. This thin layer of fiber, however, looks under magnification to be very tightly packed. I look forward to trying it with both shorter solid rods as well as longer light line semi-hollow rods. I also have another piece of Japaese bamboo which is waiting for me in California. It came through Mr. Akimaru, another Japanese rod maker of some renown and whose work I admired at last years' gathering on the Henry's Fork. It has a very clean look to it and has been treated according to traditional Japanese methods to add resiliency. If I am diligent I will also have a rod made from this material by next June on the Henry's Fork.