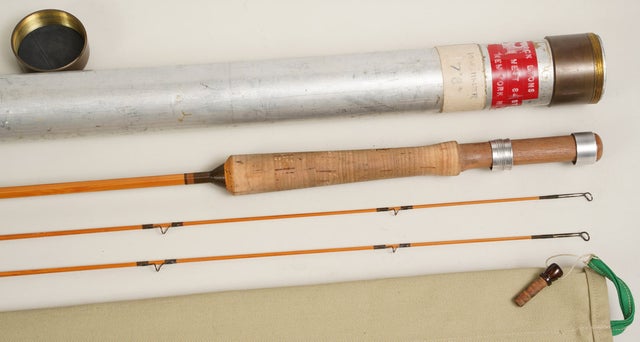 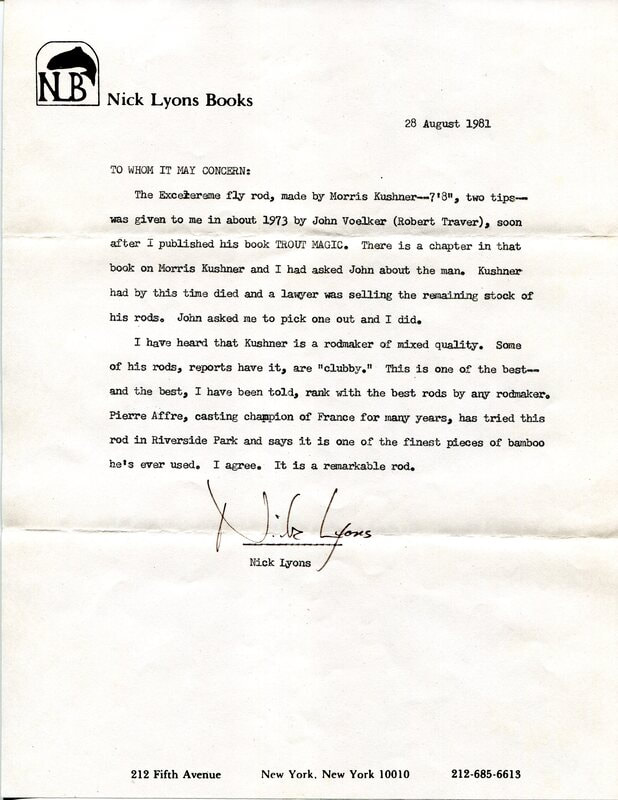 Morris Kushner 7'8" 2pc/2 tips 3½ oz. This is about as nice a Kushner as I have seen; it belonged at one time to Nick Lyons who got it from the Kushner estate just after his passing. In a letter of provenance that accompanies this sale, Nick says he acquired the rod in about 1973 after publishing John Voelker's (Robert Travers) book Trout Magic which has a chapter about Morris Kushner and his rods. The same letter states that Pierre Affre, French casting champion, proclaimed it one of the finest pieces of bamboo he had ever cast. Interestingly it has an unusual (for Kushner) Ritz style grip, perhaps a nod to the parabolic rods championed by Charles Ritz. Kushner was most influenced in his rod making by the work of Paul Young with whom he was good friends and it shows in the parabolic action of this rod which will cast a #5 line. John Voelker in his chapter about Kushner says that he was able to easily cast a much longer line with the Kushner rod than with other rods and this is a very pleasant feeling rod indeed, though I have not had a chance to cast it. Excellent shape throughout with perfect fitting Super Z ferrules. The wood reel-seat is a bit dry and could use a few light coats of oil finish in my opinion. Nick Lyons was good friends with Hoagy Carmichael who apparently made a new bag for the rod, possibly because the original bag was damaged. He may also have made the ferrule plug and the rod mounts in the bag like a Garrison with the ferrule up with plug in and attached to the pull tab, like on a Garrison or Carmichael rod. The tube appears to be original and has Nick Lyons address in New York on a plastic label. From the Thomas H. Clark collection. SOLD